Julie Dean gained her BMus degree in 1998 at Goldsmith College, London. In 2006, after a successful management career in retail and the licensed trade, she returned to music attending Trinity College of Music. She spent four years as a postgraduate studying the recorder with Rebecca Miles and Philip Thorby as well as Viola da Gamba with Alison Crum. Julie has also had recorder tuition, courses and masterclasses with Piers Adams, Pamela Thorby, Tom Beets, Matthias Maute and Bart Spanhove. Julie is also interested in playing middle eastern percussion instruments. For a personal project she is researching the effects of hearing loss in musicians.

As a recorder player her performances have included 5 years at the Greenwich International Early Music Festival, St Martin-in-the-Fields,  Handel House, Southbank Centre, The Exmoor Singers of London and historical dance group The Renaissance Footnotes. She was a winner of the Trinity College of Music Early Music Competition in 2011  with Ensemble Tramontana, performing with the group at the Greenwich International Early Music Festival 2011. She performs regularly with the comedy and jazz influenced BRLO 'British Recorder Light Orchestra', Belsize Baroque Orchestra as well as many solo and ensemble performances.

Julie works actively with children and adult amateur recorder players, directs several weekly groups, offers individual tuition and conducts for the Society of Recorder Players. She was also invited by the Société des Amis de Arnold Dolmetsch to teach amateur recorder players from across Europe in a workshop in Le Mans, France. Her teaching website is RecorderGroupsLondon.co.uk.

Julie is also one of the few UK teachers of the Suzuki method for the recorder for early years children. She has a number of adult pupils, is visiting recorder teacher at St Dunstan's College, London, and Suzuki Recorder teacher in St Saviours CE school, Herne Hill, London. She has also been a guest Suzuki teacher at a music school in Germany.

Julie also runs her online recorder shop, RecorderShopLondon.co.uk and has repaired and revoiced recorders for over 14 years. She has received training from recorder makers Tim Cranmore (UK) and Tom Prescott (USA).  She works with players of all abilities and has a number of professional players and teachers as her regular clients.

She regularly gives a presentation to help recorder players understand recorder maintenance and revoicing. The presentation has been delivered in a number of events and venues including the Royal Academy of Music, Royal Birmingham conservatoire, Encontro de Música Antiga de Loulé, Portugal and various amateur recorder player gruops. Julie is a professional member of NAMIR (National Association of Musical Instrument Repairers) 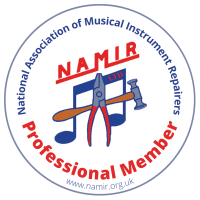